On Friday 28th March, as part of the Manchester Histories Festival, the Forgotten Fields project will be showing all its films in an informal, drop-in and out filmshow: 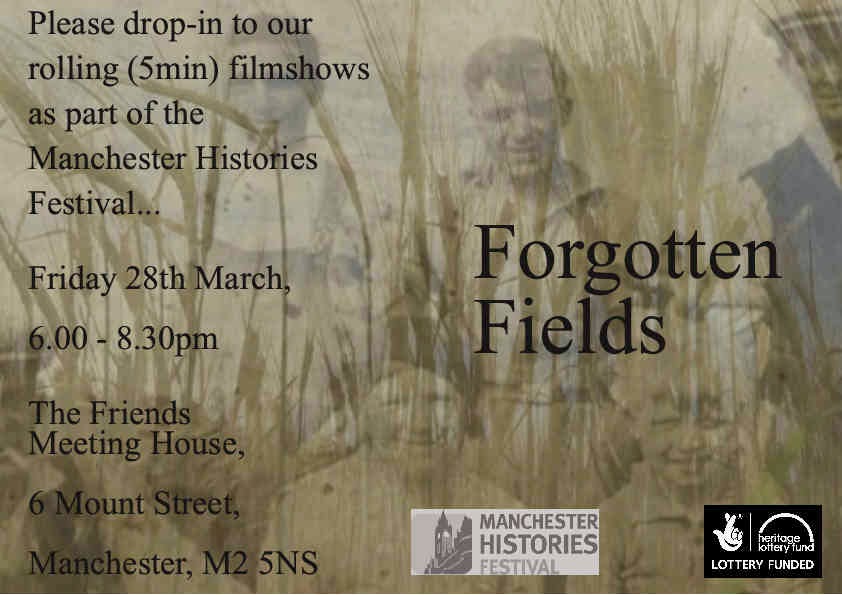 Posted by Forgotten Fields at 05:29 No comments:

As the project draws to a close
(from the point of view of funding) and the loose ends are tidied, we have a new aim; to communicate the research more widely.

Last night we had the follow up session to our Social Media training with Ally Fogg and Forgotten Fields has voluntarily, but with trepidation, joined Twitter.

This is with the aim of advertising the work we have done and events coming up (rather than to be constantly tweeting.)

The small films made as part of this project by Charlotte Dean and the previous Forgotten Fields documentary film made by Abi McLoughlin will also be shown as part of the festival on the evening of Friday 28th March at the Friends Meeting House.

Many thanks to Heritage Lottery Fund for their support of this project with a Sharing Heritage grant:
www.hlf.org.uk/HowToApply/programmes/Pages/SharingHeritage

Thanks also to The Kindling Trust for all support with this project
www.kindling.org.uk/projects

In addition to the performance, children of Oldfield Brow School also had a chat to Ron Hutchinson (who was born in Dunham Massey) about how he and other children used to harvest potatoes at the local farms in the school holidays.

Ron was born at Brook Cottage and told horrifying (!) tales of having to go to the privvy on cold wet, black nights!
We will transcribe the tales and put them here as soon as possible.

Many thanks too to Gina who brought along her collection of local photos...which help put the stories into perspective.
Posted by Forgotten Fields at 02:34 No comments:

Year 6 children from the local Primary School have worked hard to produce a play in a day!
Children travelled to the  wonderful Dunham Massey Village Hall to work on the history of nightsoil and vegetables travelling 'to and fro' along the canal that runs as the end of their school playground.

The pupils learned about the story of nightsoil collection from Salford and Manchester, its transportation out to the local fields as fertiliser, and the return on the same boat (!) of local crops to Potato Wharf and the City's markets.


The children created the story for  'Remembering the Food Cycle' with reference to the Forgotten Fields research.
Using stories of local people and places they created characters, props and the set for the play.

Characters include the Lord Mayor of Manchester, his maid, the nightsoil man and unhappy co-workers, Mr Jackson (market gardener, Lime Tree House)
and the potato dealer at Castlefield.
Props include 'the privvy, the night-soil horse and cart, the canal-boat, the heap of night-soil, the potato dealer's barrow, the toilet bucket, and the Manchester Times, 14th April, 1849.
The set included a Potato Wharf Warehouse and the Oxnoble Pub at Castlefield (named after a potato).


The children wrote their own scripts and practiced crab like moves across the stage to keep their 'characters' facing the audience! 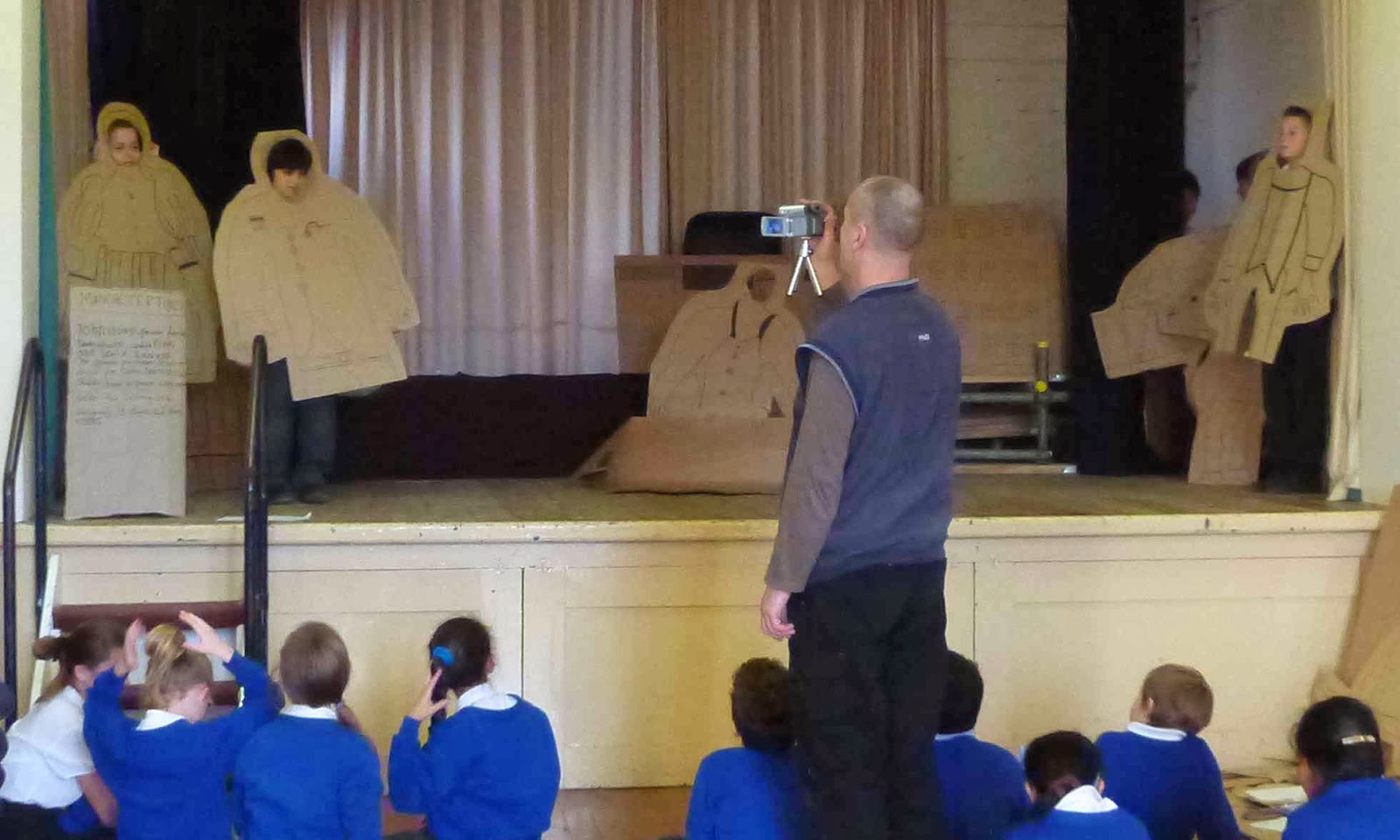 Mrs T created a wonderful rhythmn piece in costume with children not on the stage.

The whole performance was filmed by Rory and we hope to be able to show this soon...
Watch this space!


Posted by Forgotten Fields at 02:21 No comments:

On Sunday we had an interesting morning talking to people at the Abbey Leys Farmer's Market about the availability of locally grown food for the City's markets.

There was lots of interest in the role of the canal and a good deal of disgust at the thought of using the returning night-soil boat for the transport of farm food to the city!

We would like to know more about the locally grown vegetables that were carried via the Bridgewater Canal from market gardeners such as Mr Jackson at Lime Tree House at Dunham Massey whose field backed onto the waterside. I'm told that his vegetables were loaded from the wooden pier there for transport into Castlefield.

Not really directly related... but amusing nonetheless: a resident of Stockton Heath retold his childhood story:

''My grandmother, Marjorie Coombes, (born around about 1916) lived at Greenhalls Avenue, Stockton Heath...told me that in some of the houses, (I don't know if it was hers or her neighbours).... that didn't have ginnels, the night-soil men, to get through to the back to the night soil, had to come through the house to empty the pan, to carry it back through to empty it into the cart!

The other story that I remember, she told me when I was very young...when she was a little girl just after the first world war...the night soil man who drove the cart, he had one arm - he lost one arm in the first world war she said that one day the horse got startled by...and I think she said it was the swing bridge in Stockton Heath...I don't know what startled her but the horse either reared or bolted and the night soil men in the front of the cart ended up in the back of the cart covered in whatever was in the back!''

Posted by Forgotten Fields at 02:03 No comments:

Jan Hicks, Archives & Information Manager from MOSI (Museum of Science and Industry, Manchester), has given ten of us an enjoyable, clear and thought-provoking training on understanding copyright.
The trainees have come from all backgrounds: volunteers for Kindling, the National Trust, and the NW Heritage Seed Library at Ordsall Hall as well as representatives from organisations such as Cheshire Garden's Trust, Dunham WI and the Wooden Canal Boat Society.
Topics covered:
What is copyright?
How does it come into existence?
Who owns copyright?
How long does it last?
How does copyright apply to paintings, drawings, photographs, maps, works of architecture and artistic craftsmanship?
Management of copyright including Documentation, Licenses vs full transfer of rights, Explaining copyright to interviewees and caring for the documents,images and sound recordings.

Phew!...all explained clearly by Jan
flapjacks - homemade apple and raspberry from the allotment
Some useful unexpected contacts were made between previously unconnected groups in the brief networking catchup at the end.

Comments: ''Such a useful session - Thanks!''

Posted by Forgotten Fields at 02:53 No comments:

What an enjoyable and worthwhile day!

Fantastic company,
really helpful and hardworking,
the volunteers were wonderful....

Their enthusiasm for the historical context, support and engagement with the task in hand was much appreciated.

Night-soil treasures were uncovered as we dug into the soil with a real sense of wonder at making the connection with this grubby but productive part of our heritage.

Forgotten Fields
The Kindling Trust have been awarded a 'Sharing Heritage' grant from Heritage Lottery Fund to research and present their latest heritage project, 'Remembering the Food Cycle'. With this, we hope to find out about the collection of 'Night-soil' and 'sweepings' (human and horse manure); its transportation from the streets of Salford and Manchester along the Bridgewater Canal, and its use on the surrounding fields to be spread as a fertiliser. Crops were then carried back to the markets of Manchester to feed the ever expanding population. We plan to conduct intergenerational research to record memories of these practices, re-enactments to encourage discussion and further contribution. If you have photos or any information, no matter how small...please do contact us... Fiona@kindling.org.uk